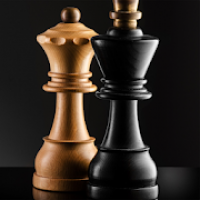 Rating: 4.00 (Votes: 1)
Facebook
Twitter
Linkedin
E-mail
WhatsApp
Chess is an excellent board logic game that develops such skills as tactics, strategy and visual memory. I'm trying to create an application that allows a player of any level to enjoy the game.

The goal of the game is to checkmate the other king.

- Castling is a double move, performed by the king and the rook that never moved.
- En passant is a move in which a pawn can take an opponent's pawn if it jumps over a field under the pawn's blow.

If you want to play good Chess, you can help me make the app better.
Please write your feedback and suggestions here; I will read them and improve the quality of the application!

Thank you.
User ReviewsAdd Comment & Review
Based on 1 Votes and 0 User Reviews
5 Star
0
4 Star
0
3 Star
0
2 Star
0
1 Star
0
No reviews added yet.
Comments will not be approved to be posted if they are SPAM, abusive, off-topic, use profanity, contain a personal attack, or promote hate of any kind.
Other Apps in This Category
More »

Space Hunter: The Revenge of Aliens on the Galaxy

Popular Apps in This Category